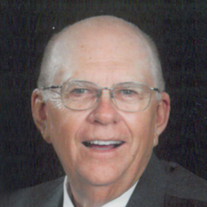 A memorial service will be held at
11:00 a.m. on Friday, April 25, 2014 at Ruestman Harris Funeral
Home in Minonk, with Rev. Dr. Richard Olson, Fr. Lloyd Cunningham
and Rev. Dr. Harry Sanders officiating. Visitation will be from 4-7
p.m. on Thursday, April 24, 2014 at the funeral home in Minonk.

Full Military Rites will be
accorded at the Inurnment in Minonk Township Cemetery. Memorials
may be made to Minonk Ambulance Association, First Baptist Church
chair lift or Wounded Warriors Project.

He was preceded in death by his
parents; two brothers, Kenneth Cunningham and Delmar Cunningham;
and a brother in-law, Wayne Kettwich.

Gene was a 1956 graduated of
Minonk-Dana-Rutland High School.

He was proud to serve two years in
the United States Army primarily in Germany from 1961-1963.

Gene farmed in the Minonk area for
57 years.

He attended the First Baptist
Church in Minonk.

Gene was a loving husband and a
supportive father who inpacted the lives of most everyone he met
with his infectious humor, laughter and quick wit. He was a great
story teller who loved a good joke, taking many almost too far -
but everyone loved him more because of the smile he brought to
their faces and the joy he brought to their lives. He will be
greatly missed.

Online condolences may be sent to
his family at ruestmanharrisfuneralhome.com.

To send flowers to the family or plant a tree in memory of Gene A. Cunningham, please visit our floral store.

To send flowers to the family in memory of Gene Cunningham, please visit our flower store.