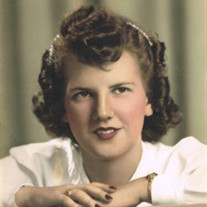 Lacon-Geneva June Lewis, 83, of Lacon,
previously of Chillicothe, went to live life eternally on Thursday
November 29, 2012 at St. Joseph Nursing Home where she called home
for the last four years.  She was born on July 10, 1929 in
German Town Hills to the late Earnest and Irene (Bruder) Lewis.

On her own, she raised her five children, Eugene Boyer, Rita
Lewis, Ronald Lewis and Bruce Lewis all of Chillicothe.  Her
eldest, Earnest (Ernie) Lewis preceded her in death as a teen.

Three brothers and two sisters also preceded her in death.

She cherished and played a very active role in the lives of her
eight grandchildren, Janelle Boyer, Amanda Lewis, Justin Parker,
Bobbie Lewis, Rebecca Lewis, Alec Lewis all of Chillicothe, Bill
Boyer of Lacon and Jordan Graziano of Hammond, IN.

She was also blessed with seven great grandchildren who brought
her great joy.

She touched the lives of many who knew her as a very tough woman
with a ton of heart.  Her door was always open when anyone
knocked.

The family would like to express their gratitude to the Sisters
and staff at St. Joseph Nursing Home for providing her a warm and
loving home.  During her stay, she made many special friends
and was involved in several activities that she truly
enjoyed.  Family would appreciate that in lieu of flowers
memorials be made there.

There will be a one-hour visitation at 11:00 a.m. and a service
at 12:00 p.m. on Monday December 3, 2012 at Lenz Memorial Home in
Lacon.  Pastor Ed Dutton will officiate.  Burial will
follow the service at Buckingham Cemetery.  Online condolences
may be expressed at www.lenzmemorialhome.com.

To send flowers to the family or plant a tree in memory of Geneva June Lewis, please visit our floral store.

To send flowers to the family in memory of Geneva Lewis, please visit our flower store.