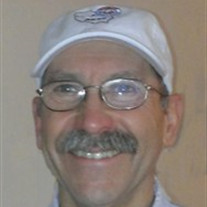 Bloomington-George S. Ford, 64, of Bloomington,
passed away Thursday, May 2, 2013, at 12:30 p.m. at his
residence.  Funeral services will be held on Wednesday, May 8,
2013 at 6p.m. at Kibler-Brady-Ruestman Memorial Home in Bloomington
with Pastor Ted Max officiating.  Visitation will be from 4-6
p.m. at the memorial home prior to the service. Full military rites
will be accorded by the Bloomington Normal American Legion Honor
Guard at the memorial home.

Cremation rites will be accorded after funeral services.
Inurnment will be at Evergreen Memorial Cemetery in
Bloomington.  Memorials may be made to Vale Community Church
or OSF Hospice in George's name.

In addition to his wife, Mary, George was preceded in death by
his father, William H. Ford.

He graduated from Sandusky high school in Sandusky, Ohio. He
worked in sales all of his life, he was a regional sales manager
for Spartan Chemical Company.  Later in life, he enjoyed
financial investing and enjoyed advising people on their
investments.

George proudly served his country in the U.S. Navy during the
Vietnam War.  During his time in the service, he was involved
in trips to the North Atlantic and to the Mediterranean on the USS
Hawkins.

He was a private pilot of planes and enjoyed flying helicopters
and riding his motorcycle.  He was a triathlete, avid cyclist
and runner.

You may send condolences or memories of George to the family
at kiblerbradyruestman.com.

To send flowers to the family or plant a tree in memory of George S. Ford, please visit our floral store.

To send flowers to the family in memory of George Ford, please visit our flower store.