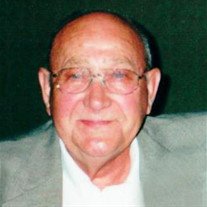 He was preceded in death by his parents, one daughter, Barb Robison, one granddaughter, Amy Robison, five sisters, Mildred, Gladys, Dorothy, Hazel and Virgina, and two brothers, Lester and Frank.

An Army Veteran, George proudly served his country during the Korean War. He was a member of the Roanoke American Legion Post #463.

George worked at Hallmark in Metamora for 34 years retiring as quality control manager in 1989.
He was a member of the Trinity Lutheran Church in Roanoke, where funeral services will be held on Saturday at 10:00 am. Rev. Bruce Scarbeary will officiate. Visitation will be held from 9-10 am prior to the services at the church. Burial with military rites will be held at the Roanoke Township Cemetery.

Memorial contributions may be made to the Trinity Lutheran Church in Roanoke.
Online condolences may be sent to the family at knappjohnsonharris.com.

To send flowers to the family or plant a tree in memory of George Jenkins, please visit our floral store.

To send flowers to the family in memory of George Jenkins, please visit our flower store.