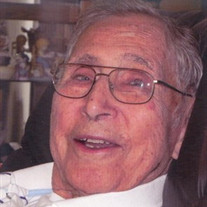 
He was born on March 22, 1926 in Eau Claire,
WI, son of George and Helen Stewart Olson. He was married to
Beverly Frederickson Olson for 55 years. She passed away in
February 2005. He married Shirley Kapraun Olson on September 24,
2006. She survives.


He was preceded in death by his parents, one
sister, Joyce Davis and one brother, Robert Olson.


George worked for IBM in Lexington, Kentucky
retiring in 1987.


He was a member of the EAA (Experimental
Aircraft Association) and had a lifelong love of flying and has
built and restored many aircraft.


He was a very loving husband, dad,
grandfather and friend. He never met a stranger. Frequent visitor
of Dave's Deli for coffee with friends.


Visitation will be held on Friday, June 7,
2013 from 4-7p.m. at the Ruestman-Harris Funeral Home in El-Paso
and visitation will be held at the Milward Funeral
Directors-Southland Drive in Lexington, Kentucky on Sunday June 9,
2013 from 4-7 pm. Graveside services will be held on Monday, June
10, 2013 at 1p.m. at Hillcrest Memorial Park in Lexington,
Kentucky. Rev. Joe Bob Grider will officiate. Ruestman-Harris
Funeral Home is assisting the family with arrangements.


Memorial contributions may be made to the
Communitity Cancer Center in Normal, IL. Online condolences may be
sent to the family at
www.ruestmanharrisfuneralhome.com
.

To send flowers to the family or plant a tree in memory of George Olson, please visit our floral store.

To send flowers to the family in memory of George Olson, please visit our flower store.