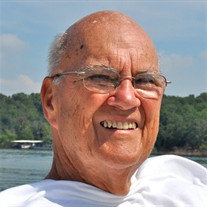 He was preceded in death by his parents, an infant daughter, Marilyn; two brothers, Donald and Howard Sauder; and two sisters, Mae Kae Hodel and Myra Leman.

An Army veteran, Jerry served his country during WWII.

After returning home from the war, Jerry began his career in the family business in Roanoke. He worked and was part owner of Sauder Furniture in Roanoke for a span of over 60 years. During this time he was fortunate to have worked with his father, brothers, sons, daughter, nephews, nieces, and grandsons.

He had served on the Village of Roanoke zoning board and the Roanoke Park District board for many years.

He was a member of the Roanoke Apostolic Christian Church where funeral services will be held on Tuesday July 15, 2014, at 10:00 a.m. Church ministers will officiate. Visitation will be held on Monday from 3-7 pm at Knapp-Johnson-Harris Funeral Home in Roanoke and from 9-9:45 am on Tuesday at the church. Burial will be in the church cemetery.

In lieu of flowers and gifts, memorial contributions may be made to the Roanoke Park District or to the Apostolic Christian Home of Roanoke . Online condolences may be sent to the family at www.knappjohnsonharris.com.


To send flowers to the family or plant a tree in memory of Gerald D. Sauder, please visit our floral store.

To send flowers to the family in memory of Gerald Sauder, please visit our flower store.