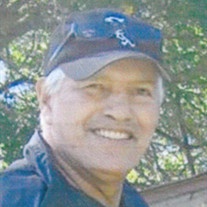 Flanagan - Glen Edward "Chief"
Reynolds, 58, of 109 South Jackson Street in Flanagan, IL passed
away at 6:20 p.m. Tuesday, on March 19, 2013 at OSF St. Joseph
Medical Center in Bloomington, IL. Funeral services will be at 11
a.m. on Friday, March 22, 2013 at The Salvation Army Church in
Bloomington with Pastor Tom Lentz officiating. Visitation will be
on Thursday from 5 to 7 p.m. at Kibler-Brady-Ruestman Memorial Home
in Bloomington and for one hour prior to services at the church on
Friday. Interment will be at the family cemetery in Estancia, New
Mexico. Memorial contributions may be directed to the family in
care of Flanagan State Bank, Flanagan, IL 61740.


He was preceded in death by his grandparents, his father, son:
Jason E. Reynolds, two brothers: Teddy and Kenneth "Junior," two
sisters: Sara Jaramillo and Tina Hearld and a nephew Adam
Jaramillo.


Glen worked as a union Laborer for the Local 362 in Bloomington
until 1997. Later he was employed as a roofer and carpenter as well
as working for ADM in Decatur. He enjoyed playing guitar and had a
passion for football, basketball, and baseball; his favorite player
was Michael Jordan. He enjoyed spending time with his family and
was always very kind, generous, and dependable. He loved listening
to country music and was a huge fan of Cher's music. He will be
sorely missed


Online condolences can be sent to the family at
kiblerbradyruestman.com.

To send flowers to the family or plant a tree in memory of Glen Edward "Chief" Reynolds, please visit our floral store.

To send flowers to the family in memory of Glen Reynolds, please visit our flower store.