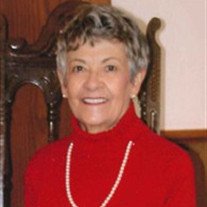 Eureka-Grace D. McCormick, 77, of Eureka, IL formerly of
Washington, IL passed away at 10:20 am on Tuesday, December 10,
2013 at Advocate Eureka Hospital.


She was preceded in death by her first husband,
Donald; four brothers, William, Clayton, Lyle, Frank; and one
sister, Irene Countz.


Grace loved to spend time in her yard and
garden.  She also enjoyed sewing, music, and most of all
spending time with her family.  She will be dearly missed by
all who knew and loved her.


Grace was a member of Our Redeemer Lutheran Church,
Eureka Garden Club, German American Society, and the Card
Club.  She was a 1954 graduate of Roanoke-Benson High
School.  She enjoyed volunteering her time at Proctor
Hospital, the Friendship House, and the Et Cetera Shop in
Eureka.


Funeral services will be held at 11:00 am on
Saturday, December 14, 2013 at Our Redeemer Lutheran Church in
Eureka.  Rev. Joe Burns will officiate.  Visitation will
be held on Friday evening from 4-7 pm at the church and one hour
prior to the service on Saturday.  Burial will be in Roanoke
Mennonite Cemetery.  Argo-Ruestman-Harris Funeral Home in
Eureka is assisting the family with their arrangements.

To send flowers to the family or plant a tree in memory of Grace D. McCormick, please visit our floral store.

To send flowers to the family in memory of Grace McCormick, please visit our flower store.