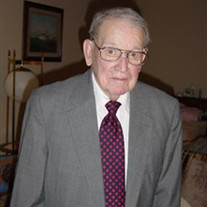 Harold M. Griffith 99, of Bloomington
Illinois passed away on Friday, December 21, 2012 at Martin Health
Center in Bloomington IL.  His graveside service will be at 12
Noon, Friday, December 28, 2012 at Roselawn Cemetery, Terre Haute,
Indiana, with the Rev. Michael Danner officiating. There will be no
visitation.   Kibler-Brady -Ruestman Memorial Home is
assisting the family with arrangements.

Memorials may be made to the Midwest Food Bank Blm IL,
American Red Cross,  Salvation Army or the Central Illinois
Humane Society in Harolds name.

He was preceded in death by his wife Marion, one sister
Mildred Heiny and one brother, Richard Kenneth Griffith.

Harold began his work career as a meat cutter, he then became a
Federal Meat Inspector for the U.S.D.A where he served for 30
years.  He was in United States Army in the 1930's and early
1940's.   He served as a member of the Army
Band.   He lived for 91 years in Terre Haute, Indiana
where he was a long time member of the Scottish Rite Masonic
Lodge.  He moved to Bloomington IL in 2003, to be with
family.  He died two days before his 100th Birthday.

Online condolences can be sent to the family at
kiblerbradyruestman.com

To send flowers to the family or plant a tree in memory of Harold M. Griffith, please visit our floral store.

To send flowers to the family in memory of Harold Griffith, please visit our flower store.