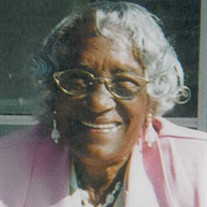 Bloomington - Helen Devine, 84,
Bloomington, passed away at 6:52 p.m. on Tuesday, September 17,
2013 at Advocate BroMenn Medical Center in Normal.
Kibler-Brady-Ruestman Memorial Home in Bloomington is assisting the
family with arrangements.

Memorial services will be at 11:00
a.m. on Monday, September 23, 2013 at the Kingdom Hall of Jehovah's
Witnesses in Bloomington.  Memorials may be made to the family
in contribution to The American Heart Association.

Helen was born on September 12, 1929 in Lexington, MS. A daughter
of Frank and Lillie (Redman) Davis. she married Kato Edwards on
December 28, 1946. Three children were born. He preceded her in
death. She was later married to Jimmy Devine until his passing in
1967.

She was a member of the Kingdom Hall Jehovah Witness. She enjoyed
fishing, canning, crocheting, crossword puzzles, playing board
games and bingo.

To send flowers to the family or plant a tree in memory of Helen Devine, please visit our floral store.

To send flowers to the family in memory of Helen Devine, please visit our flower store.