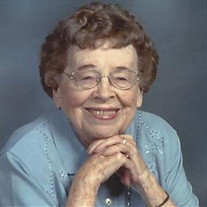 Helen Esther Wycoff, 100, of Kirkwood, Missouri formerly of Roanoke, IL passed away at her residence at 7:55 pm on Wednesday, September 2, 2015.

She was preceded in death by her parents; one sister, Lorene Mooberry; and 3 brothers, Roy, James, and Wilmer Riley.

Esther received a Bachelor of Music degree from Illinois Wesleyan School of Music where she was a member of Delta Omicron music sorority. During her last two years at Wesleyan, she taught piano in the Elementary Department. After graduating she taught English and music for 5 years at Manito High School. She played the organ at Easton Methodist Church for 20 years and for nearly 30 years at the Roanoke United Methodist church where she was a member. There were countless weddings, funerals, and special events which received her services at the keyboard. After moving to St. Louis to an assisted living facility, she continued to play piano and organ for other residents for three years.

Funeral services will be held at 10:00 am on Thursday, September 10, 2015 at the Roanoke United Methodist Church. Pastor Charlie Graul will officiate. Visitation will be held from 5-7 pm on Wednesday evening at the Knapp-Johnson-Harris Funeral Home in Roanoke. Burial will be in the Roanoke Township Cemetery.

In lieu of flowers, memorials may be given to the Roanoke United Methodist Church. Online condolences may be sent to the family at www.knappjohnsonharris.com.

To send flowers to the family or plant a tree in memory of Helen Esther Wycoff, please visit our floral store.

To send flowers to the family in memory of Helen Wycoff, please visit our flower store.