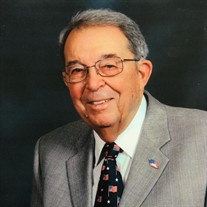 Henry Earl "Hank" Bisco of Roanoke, IL died January 2, 2019. He was a true gentleman, always putting God, family, and country before himself. He was a shining example of the Greatest Generation.

Hank was born in East Peoria, IL on January 26, 1925 to Arthur and Nellie Twiggs Bisco. He married Jane Evalyn Herbst on November 13, 1948 at the First Methodist Church in Peoria, IL. She preceded him in death on June 7, 2004.

Hank was proud to have served in the Army during World War II in the European Theater of Operations. Unfortunately he was taken prisoner by the Germans on September 18, 1944, then was joyfully liberated on April 29, 1945. He was a member of the Army Reserves for several years and served during the Korean Conflict at Camp Carson Colorado. He was a life member of The American Legion, Post 463 and a life member of American Ex-Prisoners of War, Heart of Illinois Chapter where he served as treasurer. As one of the few remaining WWII veterans and POWs, he was honored to be a part of an Honor Flight in 2015, where his son, Howard, accompanied him to Washington DC.

Hank designed and built the house on Smith Street in Roanoke where he and Jane raised their family. He enjoyed woodworking, traveling, bowling, reading, new technology, music, dancing, and drawing, always having a pen or pencil available in his shirt pocket to draw for any child at anytime. Hank and Jane visited family, friends, and sites in almost all 50 states, in addition to traveling to Europe, Canada, and the Caribbean. From vacations to mundane family moments, he delighted in composing movies and photographs that created memories of life. For many years Hank bowled in Roanoke Bowling Leagues and Caterpillar Tournaments. He once nearly bowled a 300, leaving only one pin standing in the final frame.

Although Hank was hearing impaired his entire adult life, he appreciated religious hymns, classical music, musicals, and big band songs, where he reveled in ballroom dancing with his treasured life partner, Jane. Never shying away from new technology, Hank received a cochlear implant in his 70s, allowing him to reconnect with his family and friends and a TAVR at 88 to give his heart valve a boost. Computer technology delighted him. He knew his way around the keyboard, allowing him to write his memoir, learn about history and religion from online courses, text to communicate, and read his iBooks.

Hank offered his services to many organizations over the years. As a loyal member of the Roanoke United Methodist Church, Hank served as a Lay Delegate to the Annual Conference, a member of the Methodist Men, and on the church board. For many years he served on the Roanoke Zoning and Planning Board. As a member of the local SHHH (Self-Help for the Hard of Hearing) Chapter, he wrote their newsletter and maintained their database. He was an adult member of the Boys Scouts of America, actively volunteering for over 20 years. In Roanoke he served on the committees for Pack 71 and Troop 71. He also served in many roles for the District Committee of the Firebird and Wotamalo Districts. Hank was a member of the Order of the Arrow, received the District Award of Merit, and was awarded the Silver Beaver Award, which is Scouting's highest award for its volunteers at the Council level.

The family offers special thanks to the medical staff who provided aid to Hank over the years, especially the aides and nurses at Snyder Village Assisted Living and the Apostolic Christian Nursing Home in Roanoke, as well as Dr. Hughes and the medical staff at BroMenn and St. Francis hospitals.

Visitation will be at the Knapp-Johnson-Harris Funeral Home in Roanoke on Saturday January 5 from 5:00 to 8:00pm. The funeral service will be at the Roanoke United Methodist Church on Sunday January 6 at 2:00pm with a pre-service visitation beginning at 1:30pm. Revs. Robert Herath and Charlie Graul will officiate. Burial will be in the Roanoke Township Cemetery where military rites will be accorded at the grave.

In lieu of flowers, memorial donations may be made to Roanoke United Methodist Church, Boy Scouts of America, or the Greater Peoria Honor Flight. Online condolences and tributes can be sent to the family at knappjohnsonharris.com.

We will always carry your memory in our hearts.


To send flowers to the family or plant a tree in memory of Henry Earl Bisco, please visit our floral store.

To send flowers to the family in memory of Henry Bisco, please visit our flower store.