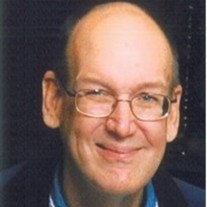 Normal-Howard C.
Van Schelt, 67, of Normal passed away on Friday, April 12, 2013 at
his residence after a 17 year battle against carcinoid liver
cancer.

Cremation rites have been accorded.
A celebration of Howard's life is being held on Saturday, April
20th at 2 PM, in the Great Hall at First Presbyterian Church at
2000 E. College Ave., Normal. Kibler-Brady-Ruestman Memorial Home
in Bloomington is assisting the family with arrangements.

Howard was preceded in death by his
parents and granddaughter Danielle.

He was married to Jane for 32
years, a loving and wonderful husband, father, and grandfather
whose sense of honor and kindness inspired his family and
friends.  He was also known for his intelligence, constant
interest in
world affairs, and well-honed deadpan humor.

Howard graduated from the
University of Akron in 1969.  He worked for General Electric
for 35 years.  During his career with GE, he held various
engineering and management positions.  He also served on
industrial technical committees for Underwriters Laboratories (UL)
and the National Electrical Manufacturers Association (NEMA).
After his retirement in 2005, he worked an additional 6 years as a
consultant at GE.

Throughout his lifetime, Howard was
an avid tennis player, golfer, bowler, and skilled craftsman. He
volunteered for RSVP as a mentor to grade school students and at
Advocate BroMenn Hospital.

We wish to thank Advocate Hospice
and Illinois Cancer Care for their compassion and dedication which
have been a constant help to our family.

Memorials may be made to the
American Cancer Society or Advocate Hospice, Normal.

To send flowers to the family or plant a tree in memory of Howard C. Van Schelt, please visit our floral store.

To send flowers to the family in memory of Howard Schelt, please visit our flower store.