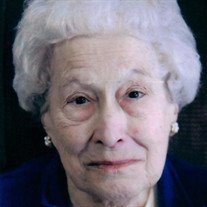 Roanoke - Imelda Mary Monge, 94, of Roanoke, passed away at 5:08 pm on Saturday January 2, 2016 at the Roanoke Apostolic Christian Home.

She was preceded in death by her parents, her husband, two brothers, Norbert and Julius Waldschmidt; two sisters, Viola Presley and Loretta Nauman; and two sister-in-laws, Mary and Connie Monge.

Imelda had worked at Caterpillar during the war and then worked as a Cook for Roanoke-Benson Unit District 60 for many years.

She was a member of St. Joseph Catholic Church in Roanoke and was a member of the altar and rosary society. She loved to play cards, cook for her family and was especially known for her chocolate chip cookies and homemade cinnamon rolls.

Funeral mass will be held at 10:00 am on Friday January 8th at St. Joseph Catholic Church in Roanoke. Monsignor Charles Beebe will officiate. Visitation will be held from 5-7 pm on Thursday at Knapp-Johnson-Harris Funeral Home in Roanoke with a rosary service being held prior to visitation at 4:30 pm. Burial will be in Roanoke Township Cemetery.

Memorial contributions may be made to St. Joseph Catholic Church or to the Apostolic Christian Home of Roanoke. Online condolences may be sent to the family at knappjohnsonharris.com.

To send flowers to the family or plant a tree in memory of Imelda Mary Monge, please visit our floral store.

Please click here to view the video tribute
To send flowers to the family in memory of Imelda Monge, please visit our flower store.