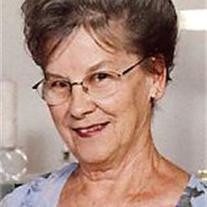 Irma E. Baggs, 80, of Lacon, died on March 23, 2014 at 4:15 am
at Proctor Unity Care Hospital in Peoria. Born in Peoria to the
late Herman and Clara (Kellerstass) Stuff, she married Walter Baggs
on January 24, 1953 in Chillicothe. Her late husband Walter
preceded her in death in July of 2003.


She was a member of St. John's Lutheran Church in Lacon.


Cremation rites have been accorded.  Graveside services will
be held at the Lacon cemetery on Saturday June 7th at
1:00 pm. Celebration of life will be immediately following at the
Lacon Country Club.


Memorials can be made to St. Jude or St. John's Lutheran Church in
Irma's name. Online condolences may be left at lenzmemorialhome.com.

To send flowers to the family or plant a tree in memory of Irma Baggs, please visit our floral store.

To send flowers to the family in memory of Irma Baggs, please visit our flower store.