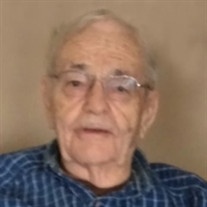 Jack C. Bechtel
Roanoke- Jack C. Bechtel, 82, of Roanoke, IL passed away at 2:11 pm on Wednesday, July 2, 2014 at OSF St. Francis Medical Center.
He was born on April 26, 1932 in Eureka, IL a son of Andrew and Frances Kollman Bechtel. He married Marilyn Wright on November 8, 1958 in Peoria, IL. She survives.
Also surviving are his chilren, Mark (Chris) Bechtel of Menomonie, WI; Vanessa (Steve) Walker of Bloomington, IL; Jackie Kauffold of Mt. Zion, IL; six grandchildren, Megan Bechtel, Kaila and Kolton Walker, Ryan, Calleen, and Zachary Wrigley; one brother Fred Bechtel of Eureka, IL; and two sisters, Joanne (Bernard) Krumholz of Eureka; Dorothy Veach of Bloomington.
He was preceded in death by his parents.
Jack and his wife Marilyn owned and operated A & W and Bechtel's Family Dining for 40 years. They also owned and operated the Oak Ranch Motel for many years all located in Roanoke.
An Army veteran, Jack proudly served his country during the Korean War.
He was a member of the EAA Flying Association and was a private pilot for many years
He was a member of the St. Joseph Catholic Church where memorial mass will be held at 3:00 pm on Thursday, July 10, 2014. Fr. Paul Meismer will officiate. Visitation will be held one hour prior to the service. Burial of ashes will be in Roanoke Township Cemetery with military rites accorded. Knapp-Johnson-Harris Funeral Home is assisting the family with arrangements.
In lieu of flowers, memorial contributions may be made to the St. Jude Children's Hospital or the Apostolic Christian Home of Roanoke. Online condolences may be sent to the family at www.knappjohnsonharris.com.


To send flowers to the family or plant a tree in memory of Jack Bechtel, please visit our floral store.

To send flowers to the family in memory of Jack Bechtel, please visit our flower store.