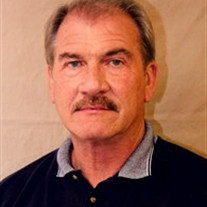 Hospice Home, Peoria after a courageous battle with cancer.

Knappe will officiate. Burial will be in Southside Cemetery,
Pontiac.

Visitation will be on Sunday from 3 to 7 at First Lutheran
Church,

Annabelle Webb Johnson Allen. He and his parents moved to Chenoa
and

Other survivors include his daughter, Kelly (Ed) Faulk and his
son
Jacon Allen, both of El Paso; step children, Melanie Brinkman,
Pontiac,

Rusty worked for the Illinois Department of Corrections at
Pontiac

prison until his retirement in 2003. Rusty was a dedicated member
of

the El Paso Rescue Squad with over 35 years of service. He was
employed

by the Danville Area Community College following his retirement as
a

Rusty was a lifelong fan of dirt track racing, and began helping
Jack

Tyne of Streator in the 1970's. He continued helping Jack for
many

years until he bought and raced his own car. He raced many tracks
in

Illinois his favorite being Fairbury American Legion Speedway,
where he

won the 6 cylinder track championship in 1988. Rusty quit racing
in

1991, then worked at Fairbury Speedway as an official and
eventually

becoming the track promoter. Under his leadership Fairbury
American

In lieu of flowers memorials contributions may be directed to
First

to his family at ruestmanharrisfuneralhome.com.

To send flowers to the family or plant a tree in memory of James "Rusty" Allen, please visit our floral store.

To send flowers to the family in memory of James Allen, please visit our flower store.