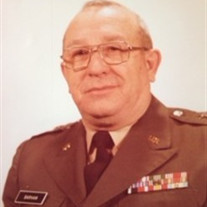 Bloomington-James E. Barham, 92, of Bloomington formerly of
Springfield, died on Tuesday May 22, 2013, at Heritage Health in
Bloomington Illinois.  Interment will be at Camp Butler
National Cemetery with full military honors provided by the Army
National Guard Honors Program.

In lieu of flowers, memorial contributions can be made to the
Shriners Hospitals for Children, P.O. Box 20827, Tampa, Florida
33622-0827 in James's name. Kibler-Brady-Ruestman Memorial Home in
Bloomington is handling arrangements.

Jim was career military, having proudly served in World War II
and then in the Illinois Army National Guard where he retired at
the rank of Major General.  During his career he graduated
from the US Army Command and General Staff College.

He was a member of the Ansar Shrine.

Online condolences and memories of Jim may be sent to the family
at kiblerbradyruestman.com.

To send flowers to the family or plant a tree in memory of James E. Barham, please visit our floral store.

To send flowers to the family in memory of James Barham, please visit our flower store.