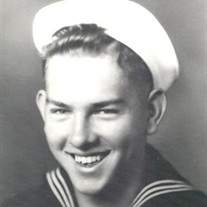 
He was born on January 12, 1926 in Streator, IL a son of Ralph and
Geneveieve Sullivan Manley. He married Ella Marie Murphy on July
25, 1952 in Bloomington, IL.  She survives.


He was preceded in death by his parents, two sisters, and one
brother.


Earlier in life, James had worked for State Farm and had a grocery
business in Benson. He later worked at Caterpillar, Inc. for 34
years until his retirement.


A Navy veteran, he served his country during WWII and participated
in the invasion of Hiroshima and the battles of Okinawa.


He was a member of the St. John Catholic Church in Benson, the
Knights of Columbus, the American Legion Benson Post, and the IL
LST Association.  He had also served as a volunteer
EMT on the Benson Ambulance and was a life long White Sox
fan.


Funeral services will be held at 10:00 am on Monday, April 1, 2013
at St. John Catholic Church in Benson, IL.  Msgr. Charles
Beebe will officiate.  Visitation will be from 9-10 am before
the services at the church. A rosary service will be conducted at
8:30 am at the church before the visitation. Burial with military
honors will be in St. John Catholic Cemetery.
Knapp-Johnson-Harris Funeral Home in Roanoke is in charge of the
arrangements.


Memorial contributions may be made to St.  John Catholic
Church, Benson Ambulance, or a charity of the donor's choice.
Online condolences may be sent to the family at
knappjohnsonharris.com.

To send flowers to the family or plant a tree in memory of James Manley, please visit our floral store.

To send flowers to the family in memory of James Manley, please visit our flower store.