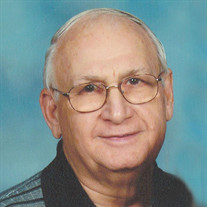 Roanoke - James P. Singer, 83, of Roanoke, passed away at 2:11 am on Sunday November 6, 2016 at OSF St. Francis Medical Center in Peoria.
Jim was born on February 23, 1933 in Streator, IL to Andrew and Alice Pope Singer. He married Joyce M. Renner on October 8, 1955 in Streator. She survives.
Also surviving are his children, Kevin Singer of Mykolaiv, Ukraine; Keri (Mark) Barra of Washington; two granddaughters, Tessa Barra of St. Louis, MO; and Lexie Barra of Washington, IL.
He was preceded in death by his parents, his step father, Doyle Mortland, three sisters, Jean Sawyer, Marge Wahl, Elizabeth Geiger, and one infant grandson; Blaide James Barra.
An Army veteran, Jim served his country during the Korean Conflict. He was a member of the Streator VFW Post # 1492.
Jim worked in the commercial uniform and linen business starting his career with Clean Towel Service in Streator, IL and retiring as branch manager of Todd Uniform Company in Washington after 35 years.
He was a member of St. Joseph Catholic Church and the Knights of Columbus.
Jim's greatest enjoyment in his life were his granddaughters, Tessa and Lexie. He never missed any events in their lives especially their sports, where he was known as the "team grandpa". Jim always had a special bond with his granddog, Maddie, who will miss him. Jim was thrilled to know that his Cubbies finally did it!
Funeral services will be held at 10:00 am on Saturday, November 12th at St. Joseph Catholic Church. Fr. Eugene Radosevich will officiate. Visitation will be held on Friday from 5-7 pm at the Knapp-Johnson-Harris Funeral Home in Roanoke with a rosary service being held at 7:00 pm. Burial will be held at Saint Stephens Catholic Cemetery in Streator where a grave side service will be held at 2pm.
Memorial contributions may be directed to OSF Children's Hospital in Peoria, or the American Diabetes Association. Online condolences may be sent to the family at knappjohnsonharris.com

To send flowers to the family or plant a tree in memory of James "Jim" P. Singer, please visit our floral store.

To send flowers to the family in memory of James Singer, please visit our flower store.