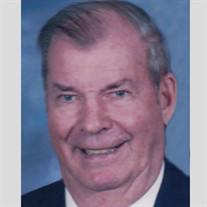 He was preceded in death by his parents, two brothers, Robert and Leslie Steinen and two sisters, Doris Bailey and Betty Beckius.

A Navy veteran, Jim proudly served his country during WWII.

Jim and Mary started their married life in Hancock, MI while Jim attended Michigan Tech University on the GI Bill. Their oldest son, Bob was born there. They moved to Springfield, IL where Jim worked for the state highway dept. and Tom and Barb were born.

Moving to Chicago in 1955, Jim started working for PPG Industries. Karen was born in Chicago and in 1963 the family moved to Pittsburgh, PA and to Cape Elizabeth, ME in 1975. After 28 years with PPG, Jim retired in 1983 and he and Mary moved to Florida where they lived for 26 years in New Port Ritchey and Inverness before moving to Roanoke in October of 2009.

Jim was a devoted husband, father, and grandfather. He lovingly cared for Mary as Alzheimer's took over her mind, even into the nursing home, where they both resided.

The family would like to thank the staff at the Apostolic Christian Home of Roanoke for the loving care given to both of their parents these past years.

Cremation rites will be accorded and a celebration of Jim's life will be held at a later date at Knapp-Johnson-Harris Funeral Home in Roanoke. Interment will be in the Roanoke Township Cemetery.

Memorial Contributions may be made to the Apostolic Christian Home of Roanoke. Online condolences may be extended to the family at knappjohnsonharris.com.

To send flowers to the family or plant a tree in memory of James A. "Jim" Steinen, please visit our floral store.

To send flowers to the family in memory of James Steinen, please visit our flower store.