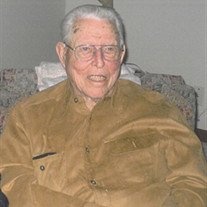 James Vogel MINONK-James R. Vogel, 95, died Friday night (Aug.
30, 2013) at 9:53 p.m. at the Meadows Mennonite Home near Chenoa. A
life-long farmer in the Minonk area, he was born near Benson July
16, 1918, the son of Henry and Rosa Reiter Vogel. He served in the
U.S. Coast Guard for 29 months during World War Two. He married
Hazel O'Brien in 1941. They celebrated their 72nd wedding
anniversary on Feb. 19th. She survives, along with two sons, Steve
(Mary) of Bloomington and Mark of St. Louis; seven grandchildren,
Robert (Kim King) of Greensboro, N.C., Eric (Beth) of Normal,
Krista Cardona (Alex) of Bloomington, Benjamin of Darien, Wis.,
Lauren of Los Angeles, Margaret of Fort Pierce, Fla., and Julia of
St. Louis; and two great-grandchildren, Mariella Cardona and
Mackenna Vogel. He was preceded in death by his parents, four
brothers and two sisters. Mass of Christian Burial will be at 10:30
a.m. Tuesday September 3, 2013 at St. Patrick's Catholic Church,
Minonk, with Father Luke Poczworowski and Father Carl LoPresti
officiating. There will be visitation at the church for one hour
prior to services. Burial with military rites will be in St. John's
Catholic Cemetery in Benson. He was a long-time member of St.
Patrick's Catholic Church and the Benson post of the American
Legion. He held an enduring interest in conservation, current
events and story-telling. He championed family farming and its
contributions to American society. He enjoyed his family,
especially sitting in a swing with his bride under a tree on their
hilltop farm, a view he considered "the center of the universe."
Memorials may be made to the American Diabetes Association.
Ruestman Harris Funeral Home, Minonk, is in charge of arrangements.
Online condolences may be sent to his family at
www.ruestmanharrisfuneralhome

To send flowers to the family or plant a tree in memory of James Vogel, please visit our floral store.

To send flowers to the family in memory of James Vogel, please visit our flower store.