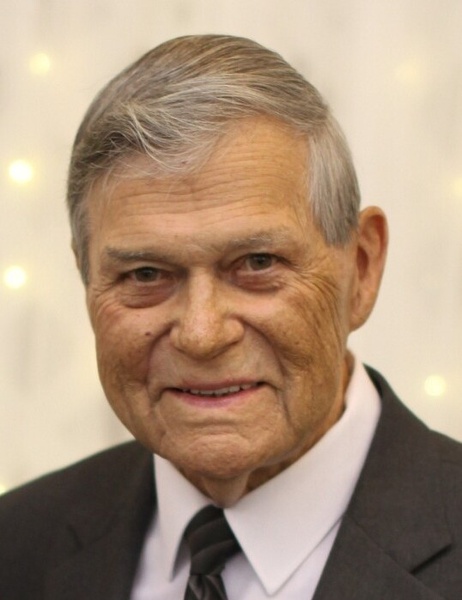 James T. “Jim” Byrd Jr., 85, of Eureka, IL, formerly of Roanoke, passed away on February 16, 2022, at his residence.
He was born on September 24, 1936, in Peoria, IL to James T. Sr. and Mireille J. Sauvage Byrd.  He married Leota M. Aberle on June 22, 1958, in Fairbury, IL.  She passed away on October 7, 2006, in Roanoke, IL.  He then married Sara Aeschleman Fischer on January 25, 2009, in Roanoke, IL.  She survives.
Also surviving is one daughter, Deb (Ken) Roth; three sons, Steve (Colleen) Byrd; Brad (Barb) Byrd; and Matt (Marlise) Byrd; 19 grandchildren and 16 great grandchildren.
He was preceded in death by his parents and one sister, Joyce Weir.
Jim served his country and was a veteran of the United States Marine Corp.
He worked at the Roanoke Farmers Elevator in Roanoke for many years before his retirement.
Jim was a member of the Roanoke Apostolic Christian Church where he had served as minister for many years.  Jim enjoyed traveling to Arizona and Florida.
Funeral services will be held at 10 am on Saturday February 19th at Roanoke Apostolic Christian Church.  Church ministers will officiate.  Visitation will be held from 4-7 pm on Friday at Knapp-Johnson-Harris Funeral Home in Roanoke and from 9-9:45 am on Saturday prior to the services at the church.  Burial with military rites will be in the church cemetery.
Memorial contributions may be made to the Apostolic Christian Home of Roanoke.  Online condolences and tributes may be sent the family at knappjohnsonharris.com

To send flowers to the family or plant a tree in memory of James “Jim” T. Byrd, Jr., please visit our floral store.

A Memorial Tree was planted for James “Jim”

To send flowers to the family in memory of James “Jim” Byrd, Jr., please visit our flower store.