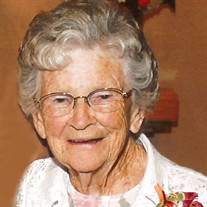 She was preceded in death by her parents, one daughter, Joan A. Umphres, one grandson, two brothers and two sisters.

She worked at the Roanoke and Eureka Apostolic Homes as a nurse's aide. Jane was a member of the Woodford County Home Extension.

Jane was a member of the Roanoke Apostolic Christian Church where funeral services will be held at 10:00 am on Tuesday, August 2, 2016. Church Ministers will officiate. Visitation will be held from 4-7 pm on Monday evening at the Knapp-Johnson-Harris Funeral Home in Roanoke and from 9-9:45 am at the church prior to the service on Tuesday. Burial will be in the church cemetery.

Memorial contributions may be made to the Apostolic Christian Home of Roanoke. Online condolences may be sent to the family at www.knappjohnsonharris.com.

To send flowers to the family or plant a tree in memory of Jane Beer Hodel, please visit our floral store.

Please click here to view the video tribute
To send flowers to the family in memory of Jane Hodel, please visit our flower store.