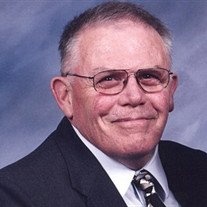 He was preceded in death by his parents, and his father-in-law,
Gaylord Craig.

Jerry was employed with Luckey Trucking, Co. in Streator and
farmed in the Minonk area. He was a Minonk Fire Protection District
trustee and belonged to the Rob Morris Masonic Lodge and the
Bloomington Consistory.

He never met a stranger and enjoyed having round table
discussions at Woody's Restaurant. He will be greatly missed by
family and friends who knew him.

He was a member of the St. Paul's United Church of Christ where
funeral services will be held at 11:00 am on Thursday, September
13, 2012. Pastor Ed Sinclair will officiate. Visitation will be
held on Wednesday evening from 4-8 pm at the Ruestman-Harris
Funeral Home in Minonk and one hour prior to the service on
Thursday. Private family inurnment will be held at Minonk Township
Cemetery at a later date.

Memorial contributions may be made to St. Paul's United Church
of Christ or Eureka College Athletic Department. Online condolences
may be sent to the family at www.ruestmanharrisfuneralhome.com.

To send flowers to the family or plant a tree in memory of Jerry Barth, please visit our floral store.

To send flowers to the family in memory of Jerry Barth, please visit our flower store.