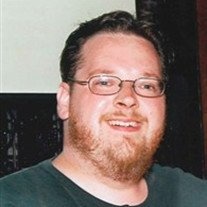 Jesse Aaron Wolfe, 32, of Indianapolis, Ind. formerly of Roanoke
and Eureka, passed away in the afternoon on Tuesday, Nov. 12, at
Indiana University Hospital in Indianapolis after a hard-fought
battle with cancer.


Surviving are his parents of Eureka, his twin
sister, Rachel Erin (James) Siegle, of Washington, with whom he
shared a very special life-long bond; two brothers, Michael B.
(Kelly) Wolfe of Roanoke and Clint D. (Jennifer Kilpatrick) Wolfe
of Benson; his beloved niece, Kaitlynn Rose Wolfe, and his
grandmothers, Eva L. Braker of Deer Creek and Harriet L. Wolfe of
Eureka.

He was preceded in death by his grandfathers, Jerry Braker and
Fred Wolfe.


Jesse was a research chemist at Albany Molecular
Research, Inc. in Indianapolis, where he conducted pharmaceutical
drug research in the Eli Lilly facility. Jesse was loved and
respected for his knowledge and work ethic by his many co-workers
at AMRI. His co-workers were his Indiana family, and he was
overwhelmed by their ongoing support and visits during his
illness.


Jesse had a brilliant mind, an outstanding sense of
humor and a quick wit. He loved to make his family and co-workers
laugh, and he loved spending time with them. Before his illness,
Jesse had embarked on a journey to change his lifestyle to become
fit and healthy. He was a gourmet cook who created unique meals for
himself and others, and he encouraged his friends and family to
follow that same path.


Jesse loved to read, especially comic books, play
video games, and put together intricate Lego kits. He also loved to
go fishing, trap shooting, and was a lifetime member of the
National Rifle Association. Jesse was also on an awe-inspiring
spiritual journey that reached out to the lives of many. He was
touched and humbled by all the prayers, words of support, and
messages sent on his behalf since he became ill. He was truly loved
by many and felt blessed to realize that in his lifetime. He was a
very loving and giving son, brother, grandson, nephew, cousin, and
a very special uncle to his niece.

A celebration of life will be at 3 p.m., Saturday, Nov. 16 at
Roanoke United Methodist Church. Visitation will be Friday, Nov.
15, from 4-7 p.m. at Argo-Ruestman-Harris Funeral Home in Eureka
and one hour before the service at the church. Cremation rites have
been accorded. Burial of ashes will be on a future date.


Jesse loved to share Thanksgiving and a good meal
with friends and family. In this spirit, a canned food collection
will be taken at the visitation and church and items will be
donated in Jesse's name to a local food pantry. Memorials may be
made to the Children's Hospital of Illinois, which once cared for
his niece, St. Jude Children's Research Hospital, the Roanoke
United Methodist Church, or the Southport United Methodist Church
in Indianapolis.  Online condolences to the family may be sent
to ruestmanharrisfuneralhome.com.

To send flowers to the family or plant a tree in memory of Jesse Aaron Wolfe, please visit our floral store.

To send flowers to the family in memory of Jesse Wolfe, please visit our flower store.