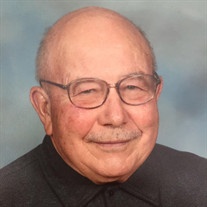 BENSON--James (Jim) B. Schneider Sr., 88, of Benson passed away on February 1 at the Apostolic Christian Nursing Home in Roanoke.

Jim graduated from Minonk High School in 1948, served in the National Guard from 1951-1953 with active duty in Korea with the Army National Guard from 1952-1953, and spent his career managing grain elevators in both Benson and Danvers. Jim enjoyed gardening and using his mechanical aptitude to keep a multitude of bicycles, cars, and appliances operational over the years. He loved his family and enriched multiple generations with stories of his young farm life with nine siblings, travels across the country each summer for family vacation, and lessons learned throughout his adulthood. Jim will be remembered for his outstanding work ethic and unwavering willingness to lend a helping hand in assisting family and friends with farming, truck driving, home renovations, garage sales, and canned food projects.

Jim was a member of the St. John's Catholic Church in Benson, a member of the Benson American Legion Post 454, a Third Degree in the Knights of Columbus member of St. Francis Assisi 4293, and a Fourth Degree Knights of Columbus member of Spalding Assembly 206 in Peoria. During his later years, he enjoyed friends and fellowship with the German American Central Society in Peoria, with highlights including dinners, festivals, a group trip to Germany in 2006, and investing time and efforts in the completion of their Hickory Grove Park. Another group of special people in his life were his friends in Michigan whom he saw several times a year while visiting his son and enjoying nature.


In lieu of flowers, memorials can be made to Benson Ambulance Squad, Benson American Legion, the German American Central Society in Peoria, and St. John's Catholic Church Building Fund. Online condolences may be sent to the family at knappjohnsonharris.com.

To send flowers to the family or plant a tree in memory of Jim Schneider, please visit our floral store.

Please click here to view the video tribute
To send flowers to the family in memory of Jim Schneider, please visit our flower store.