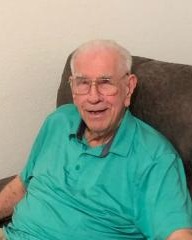 Jimmie J. France, 96, of Bloomington, formerly of Roanoke, passed away on Saturday, November 5, 2022, at Heritage Manor Health Care Center in Bloomington, surrounded by his family.

A WWII Navy veteran, Jimmie proudly served his country from 1944-1946 in the Pacific theater as Ship’s Cook aboard destroyers U.S.S. Brinkley Bass and U.S.S. Lloyd C. Acree.  He was an active member of the Roanoke American Legion Post #463.

Jimmie attended Marshall University, WV, and earned his Professional Engineering credentials in both Ohio and Illinois. He worked for Bituminous Coal Research (Huntington, WV), Marion Power Shovel (Marion, OH), and Ulrich Manufacturing (Roanoke, IL).  He retired from WABCO/Dresser/ Komatsu on September 31, 1990.  At Komatsu, he served as Chief Engineer of the Engineering and Mechanical Trucking Divisions.  He obtained multiple patents for his innovations during his time there.  Jimmie went to China 13 times to represent WABCO Mining.  During his time there, he also consulted with the Chinese regarding the construction of the Three Gorges Dam.  He was active in the Society of Automotive Engineers for many years.

Jimmie was also active in his community.  He was a member of Roanoke United Methodist Church, serving in many leadership roles over the years.  He volunteered for The United Way, Mended Hearts, and was a regular blood donor for the American Red Cross. He enjoyed helping at the Methodist Men and American Legion breakfasts.  He was instrumental in the creation of the Roanoke Park swimming pool, having designed it, serving as treasurer of the founding board, and overseeing the management of it during its early years.

An accomplished photographer, Jimmie loved taking pictures. He was an avid collector, including everything from coins, to wine, to beanie babies.  He helped found the Roanoke Dance Club and loved the time spent with his friends.

Memorial contributions may be made to The Roanoke Park District & Swimming Pool, Land of Lincoln Honor Flight, or to the Roanoke United Methodist Church.  Online condolences and tributes may be sent to the family at knappjohnsonharris.com.

To send flowers to the family in memory of Jimmie J. France, please visit our flower store.