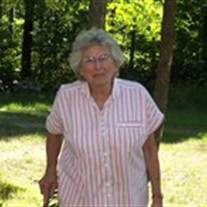 Washburn - Joan Sloan of rural Washburn died at 5:29
January 19 at her residence with her family by her side. She was
born July 16 1929 in Delavan, IL to the late Richard and Ludwina
Thaller Connell.


Joan grew up on a family farm in Tazewell County.
She graduated from Yates City High School in 1947 and then studied
nursing at St. Francis School of Nursing where she graduated as an
RN in 1950. She married Robert Sloan on July 28 1956 in Elmwood IL
and started her family on a farm near nearby. Later, she moved with
her growing family to a farm near Tremont, and then to her current
home in rural Marshall County in 1967. Joan last worked at St.
Joseph Nursing Home for 25 years and retired in 1994. Her husband
Robert passed on August 17 2009. Faith and family were the most
important things in Joan's life. She was engaged with farming and
the outdoors her entire life. She led the family on many camping
trips and owns a cabin in Northern Minnesota where she enjoyed many
summers with her children and grandchildren.


Joan was a member of Immaculate Conception Church
and the Altar and Rosary Society there.


She was also preceded in death by her sister
Rosemary Runyon.

Services will be at 11:00 am Friday, January 24 at Immaculate
Conception Church in Lacon, Fr. Tom Mizeur will officiate.
Visitation will be held on Thursday from 4-7 pm and one hour prior
to the service all at her church with a prayer service following
Thursday's visitation. Memorials can be made to St. Joseph's
Nursing Home or Hands Helping Haiti Water Project. Online
condolences can be left at lenzmemorialhome.com.

To send flowers to the family or plant a tree in memory of Joan Therese Sloan, please visit our floral store.

To send flowers to the family in memory of Joan Sloan, please visit our flower store.