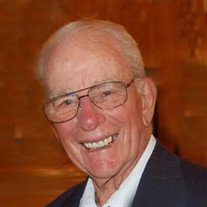 He was born on June 21, 1923 in Roanoke, IL to John Battista and Marta Monge Martino. He married Mary Teresa Santi on June 4, 1949 in Roanoke. She survives.

He was preceded in death by his parents; one son, Tom Martino; four brothers, Pete, Sam, Battista, and Robert "Red" Martino; and one sister, Jeannette Sansone.

An Army veteran, Joe proudly served his country with Company K, 185th Regiment, 3rd Battalion, 40th Division during WWII in the Pacific Theater. He was a member of the Roanoke American Legion Post #463.

Joe retired as a supervisor for Caterpillar after 30 years of service.

He was a member of the St. Joseph Catholic Church and the Knights of Columbus.

Joe loved sports, especially baseball where he was known for his pitching, not only during his school years, but also for the town team and during Sunday Morning League. He shared his love of baseball with the youth and coached little league in Roanoke for many years. He loved his Pittsburgh Pirates, music, fishing, hunting, the Roanoke Legion and especially his family including his dog, Missy Brown.

Funeral Mass will be held at 11:00 am on Friday February 20th at St. Joseph Catholic Church in Roanoke. Monsignor Charles Beebe will officiate. Visitation will be from 4-7 pm on Thursday also at St. Joseph with a rosary service at 3:45 pm. Additional visitation will be from 10-11 am on Friday prior to the services at church. Burial with military rites will be in Roanoke Township Cemetery. Knapp-Johnson-Harris Funeral Home in Roanoke is in charge of arrangements.

Memorial contributions may be to the Roanoke American Legion Post #463 or to St. Joseph Catholic Church. Online condolences may be sent to the family at knappjohnsonharris.com.


To send flowers to the family or plant a tree in memory of Joe Victor Martino, please visit our floral store.

Please click here to view the video tribute
To send flowers to the family in memory of Joe Martino, please visit our flower store.