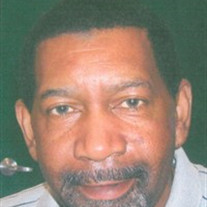 Bloomington- John H. Johnson, 57,
of Bloomington, passed away at 2:59 a.m. Monday, October 8, 2012 at
OSF St. Francis Medical Center in Peoria. Graveside services will
be held at 10 a.m. on Friday, October 12, 2012 at Evergreen
Memorial Cemetery in Bloomington. In lieu of flowers, memorials may
be made to the family in John's name. The family of John has
entrusted Kibler-Brady-Ruestman Memorial Home in Bloomington with
the care of their loved one.

John was born on December 3, 1954,
to the union of Timothy E. and Rosetta (Ellis) Johnson in
Bloomington. He graduated from Bloomington High School.

He was preceded in death by his
parents, brother, Lonnie D. Johnson and two infant daughters.

John was a school bus driver for
Unit #5 and worked for Nestle Beich Candy in Bloomington.

He was a former member of Union
Missionary Baptist Church where he served as a musician. John was
currently a member of Kingdom Ministry in Decatur.

To send flowers to the family or plant a tree in memory of John H. Johnson, please visit our floral store.

To send flowers to the family in memory of John Johnson, please visit our flower store.