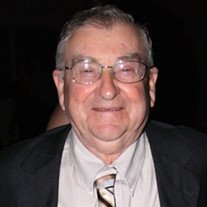 
He was preceded in death by his parents, two sisters, and two
brothers.


Joseph worked as an assembler for Caterpillar Tractor Co. in East
Peoria for 31 ½ years before his retirement in 1985.  After
his retirement he helped his brother Pat at the gas station in El
Paso.


Joe was proud of his family especially his marriage of nearly 57
years to Joyce, the love of his life.  He loved to fish and
looked forward to their yearly fish fry with his fishing buddies
including his brother, Pat.  He also loved to play cards with
his friends.  He looked forward to the Scott family reunion
each July in El Paso.  Joe loved to tell stories and was a
quiet but fun-loving man.  He was loved by all and will be
missed terribly.


Funeral services will be held at 11:00 am on Wednesday, May 29,
2013 at the Ruestman-Harris Funeral Home in El Paso.  Rev.
Christine McNeal will officiate.  Visitation will be held from
5-8 pm on Tuesday evening at the funeral home.  Burial with
full military honors will be in St. Joseph Catholic Cemetery in El
Paso.


In lieu of flowers, memorial contributions may be made to the El
Paso Rescue Squad.   Online condolences may be sent to
the family at ruestmanharrisfuneralhome.com.

To send flowers to the family or plant a tree in memory of Joseph A. Scott, please visit our floral store.

To send flowers to the family in memory of Joseph Scott, please visit our flower store.