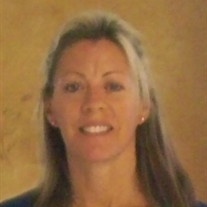 Interment will be at Prairie
Cemetery in St. Charles.  Memorials may be made to Cadence
Cancer Center, 304 Randall Rd., Geneva, IL 60134.
Kibler-Brady-Ruestman Memorial Home in Bloomington is assisting the
family with arrangements.

Julie was born on July 14, 1962 at
the Great Lakes Navel Base in Waukegan, IL, a daughter to Donald
and Barbara Ziehen Blink.  She married Pat Brady on June 8,
1996 at Holy Trinity Catholic Church in Bloomington, IL.  He
survives.

She grew up in Antigo, WI.
Graduating from Antigo High School in 1980.  She graduated
with High Honors with a Degree in Biology from St. Norbert College
in 1984.  In 1991, she graduated Magna Cum Laude from the
University of Wisconsin Law School.  After graduation from law
school, she served as a Trial Attorney in the Honors Program of the
Tax Division of the United States Department of Justice wherein she
investigated and prosecuted complex tax and white-collar federal
criminal offenses in a variety of jurisdictions throughout the
United States.  She also worked as an attorney in the Class
Action Unit of the Legal Department at State Farm Insurance
Companies in Bloomington, IL.  Most recently, she worked as a
Special Assistant in the Executive Office of the Cook County
Sheriff.

Julie's most valued roles were that
of dedicated wife and mother to her children.

To send flowers to the family or plant a tree in memory of Julie A. Brady, please visit our floral store.

To send flowers to the family in memory of Julie Brady, please visit our flower store.