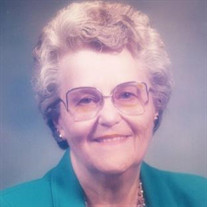 She was born on June 30, 1926 in Bradenton, IL a daughter of Walter and Pearl Thompson Wilson.

She was preceded in death by her parents, one sister Roberta Joanne Smilie; one daughter Priscilla Jean Bowers; and one grandson Peter David O'Rourke.

June owned and operated the Cottage Café in Benson for many years. She was a member of the Roanoke American Legion Auxiliary, Woodford County Democratic Women's Organization, and Order of Eastern Star.

Funeral services will be held on Wednesday, November 23, 2016 at 11:00 am at Knapp-Johnson-Harris Funeral Home with a visitation one hour prior to the service. Walter Barra will officiate. Private family burial will be held at a later date in the Roanoke Township Cemetery.

Memorial contributions may be made to the Alzheimer's Association. Online condolences may be sent to the family at www.knappjohnsonharris.com.


To send flowers to the family or plant a tree in memory of June Barra, please visit our floral store.

To send flowers to the family in memory of June Barra, please visit our flower store.