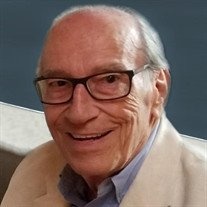 DELRAY BEACH, FL - Kaywin Lloyd Martin, 81, of Delray Beach, FL, passed away at Delray Medical Center on January 11, 2021. He was born in Roanoke, IL, on June 25, 1939, to Orville C. and Priscilla "Jackie" Eisenmann Martin. He is survived by his children, Terri and Ryan Huber of Stanford, IL, Ken (Christine) Martin of Mooresville, NC, and Julie Crawford of Plymouth, MI; his wife and loved companion, Patricia Martin, of Delray Beach, FL; his grandchildren: Allen (Erika) Huber; Sheryl (Nick) Kaiser; Craig (Chelsea) Huber; Jessica, Nicole and Drew Dawson; Julia and Jason Martin; and his excitedly anticipated first great-grandchild in March. Kaywin is also survived by two brothers, Dale (Marilyn) of Winston-Salem, NC, Glen (Carol) of Roanoke, and his brother-in-law Sam Hohulin of Goodfield, IL. He was preceded in death by his parents and his sister, Sandy Hohulin.
Kaywin loved his upbringing in the rural setting of Roanoke. He enjoyed reminiscing about The Jumbo, riding his tricycle down country roads when they lived on the farm, and driving his cars, at times too fast, to Peoria on dates. Cars have always had a place in his life, from his first job cleaning them at his father's automotive dealership to his "collection" of Mustangs, owning over 20 of them during his lifetime. While he was attending Bradley University, he married Karen Schaefer and kept busy with his studies and weekends at Fort Leonard Wood as an Army Reservist until he graduated with a degree in Business and accepted a job with Ford Motor Company in the Finance Department. He was baptized in the Apostolic Christian Church at age 26 and led the family in prayers and dedicated church attendance. Through 28 years of marriage, they raised us and moved around the country as his 30-year career with Ford took him to Michigan, Pennsylvania, and New Jersey. Heading for warmer weather after his retirement in 1993, he has lived in South Florida ever since. His primary interests during these years were his love for history, teaching and influencing, as seen in his earnest conversations with children and grandchildren, the underlined articles that he passed on in abundance, and his support of Republican Political events in hopes of leaving a better country for future generations. Kaywin and Patricia supported and attended many events held by President Trump at Mar-a-Lago in recent years! Dad had a lot of wisdom, and we loved that he shared that with us. It cannot be imagined how we will miss his love and his constant helpfulness, support during trials, and input into our lives.
A private service for immediate family will be held at the Knapp-Johnson-Harris Funeral Home in Roanoke, IL, on Saturday, January 16, 2021. Interment will be at the Roanoke Apostolic Christian Cemetery. Memorial contributions can be made to the Roanoke Apostolic Home, 1102 W Randolph St, Roanoke, IL 61561.
Online condolences may be sent to the family at knappjohnsonharris.com.

To send flowers to the family or plant a tree in memory of Kaywin LLoyd Martin, please visit our floral store.

To send flowers to the family in memory of Kaywin Martin, please visit our flower store.