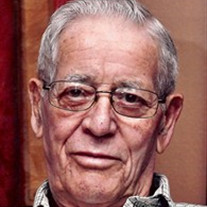 He was preceded in death by his parents, one son-in-law Rich
Knepp, and one grandson.

Bud worked at the East Peoria Caterpillar plant for over 30
years. After his retirement from Caterpillar he worked part time at
RP Lumber in El Paso.

Funeral services will be held on Monday, January 14, 2013 at
10:00 am at the Ruestman-Harris Funeral Home in El Paso, IL. Tom
Hoffman will officiate. Visitation will be held on Sunday afternoon
from 1-4 pm and from 9-9:45 on Monday before the service at the
funeral home. Burial will be in Hinthorne Cemetery in Hudson,
IL.

Memorial contributions may be made to the Apostolic Timber Ridge
Home in Morton. Online condolences may be sent to the family at
ruestmanharrisfuneralhome.com.

To send flowers to the family or plant a tree in memory of Laurence "Bud" Hinthorne, please visit our floral store.

To send flowers to the family in memory of Laurence Hinthorne, please visit our flower store.