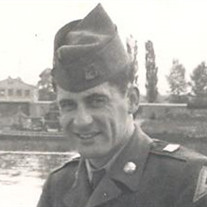 Roanoke- Leo Baumann, 84, of El Paso, formerly of Roanoke,
passed away at 8:49 am on Thursday December 27, 2012 at Advocate
BroMenn Medical Center in Normal.

He was born on June 21, 1928 in Streator, IL, to Christopher and
Hulda Schlabach Baumann.

He was preceded in death by his parents; one brother, Bill
Baumann; and one sister, Elnora Lindeburg.

An Army veteran, Leo served his country during the Korean War.
He was a member of the Roanoke American Legion Post # 463.

He was a truck driver and he and his brother, Bill had owned and
operated Baumann Trucking in Roanoke.

Private family services will be held on Monday December 31, 2012
and burial with military rites will be in St. Peter Lutheran
Cemetery in Benson. Knapp-Johnson-Harris Funeral Home in Roanoke is
in charge of arrangements.

Memorial contributions may be made to the Roanoke Ambulance.
Online condolences may be sent to the family at
knappjohnsonharris.com.

To send flowers to the family or plant a tree in memory of Leo Baumann, please visit our floral store.

To send flowers to the family in memory of Leo Baumann, please visit our flower store.