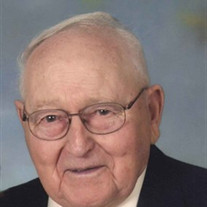 
Eureka-Loren G. Hodel, 88, of Eureka, IL formerly of Goodfield, IL
passed away at 4:20 pm on Tuesday, April 22, 2014 at the Apostolic
Christian Home in Eureka where he had been a resident.


He was preceded in death by his parents, one daughter Janet Losher,
one sister, one half sister, three half brothers, and two
great-grandchildren.


Loren worked on large dairy farms in Hampton, NH and Batavia, IL as
a herdsman prior to moving back to the Goodfield area in 1953 to
start his own farming operation.  He was very successful in
building a herd of highly productive Registered Holstein
cattle.  He will be remembered for all the custom hay baling
he did each summer for so many years.  Loren and his wife also
opened and operated the Hodel Insurance Agency in 1967.


He was very active in the local community throughout his
life.  He was a member of the Eureka Christian Church where he
had served as a deacon.  He was a 4-H leader for 16 years,
served two terms on the District 140 School Board, and served on
the boards of the Farmer's Grain Co-Op of Eureka and Woodford
County Mutual Insurance Company.  Loren was also a 50 year
member of the Taylor Masonic Lodge.


Funeral services will be held at 10:30 am on Friday, April 25, 2014
at the Eureka Christian Church.  Pastor Jennie Churchman will
officiate.  Visitation will be held on Thursday, April 24 from
5-8 pm at the Argo-Ruestman-Harris Funeral Home in Eureka.
Burial will be in Olio Township Cemetery.


Memorial contributions may be made to the Eureka Christian Church
Building Fund or the Apostolic Christian Home (Heiterland Unit) in
Eureka.  Online condolences may be sent to the family at www.ruestmanharrisfuneralhome.com.

To send flowers to the family or plant a tree in memory of Loren G. Hodel, please visit our floral store.

To send flowers to the family in memory of Loren Hodel, please visit our flower store.