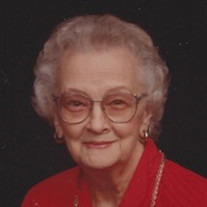 Marcia Lucille Swanson, 103, of
Bloomington, passed away on April 22, 2013 at 5:13 pm in
Bloomington at Martin Health Center. Funeral services will be held
on Saturday, April 27, 2013 at 1 pm at Kibler-Brady-Ruestman
Memorial Home in Bloomington with Rev. Camilla Hempstead
officiating. Visitation will be held on Saturday from noon until 1
pm at the memorial home.

Marcia graduated from Illinois
Wesleyan University in 1934, with her Bachelor's Degree in
Education, and was a lifelong member of Alpha Gamma Delta sorority.
While at the University she played basketball and
baseball.

She was a high school teacher for
several years in Chenoa, Il, and after she and Dave moved to
Berkeley, CA, she taught there also.  Her subjects were Home
Economics, Science, and Physical Education.    Marcia
loved to sew, cook, do crossword puzzles, play cards, and visit
with family.

Marcia and Dave traveled quite
extensively while he was with State Farm Insurance, first at the
Regional Office in Berkeley, CA, and then back in Bloomington at
the Home Office. She was a devoted member of Wesley Methodist
Church, Brokaw Women's Auxiliary, P.E.O., and for many years was on
the Women's Bowling Team at Bloomington Country Club.

Her family was blessed to have
Marcia with them for so many years in such good health.  She
always felt she was blessed to have so many good family
members and loving friends. She will be missed but will remain
in our hearts forever.

To send flowers to the family or plant a tree in memory of Marcia L. Swanson, please visit our floral store.

To send flowers to the family in memory of Marcia Swanson, please visit our flower store.