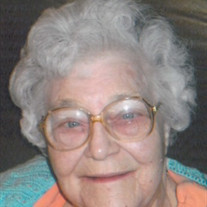 BLOOMINGTON - Margery Alice
Spiecker, 89, of Bloomington passed away at 10:16 pm on Tuesday,
October 15, 2013 at The Bickford House in Bloomington.

Per Margery's wishes, cremation
rites will be accorded and private family services will be held.
Inurnment will be at Evergreen Memorial Cemetery in
Bloomington.  In lieu of flowers, memorials may be made to the
McLean County Humane Society or an organization of the donor's
choice in Margery's name. Kibler-Brady-Ruestman Memorial Home in
Bloomington is assisting the family with arrangements.

Margery was born on March 25, 1924
in Northwood, IA, a daughter of Otho William and Modesta "Maude"
Quinlan Vaughan. She married Arnold Bergum in 1943.  Later she
married  Richard Spiecker on December 2, 1950  in
Springfield.  He preceded her in death on March 10, 2012.
Richard and Margery were married for 63 years.

In addition to her husband Richard,
Margery was preceded in death by her parents, a sister, Rose
Vaughan and a brother, Bill Vaughan.

During WWII Margery worked in a
factory in Chicago to help the war efforts.

In her early years, Margery
attended the Chicago Art Institute. She was artistically gifted,
was an avid reader and loved animals. Margery enjoyed listening to
a wide variety of music.

She loved spending time with her
family and grandchildren.  Margery was deeply loved and will
be dearly missed by her family.

To send flowers to the family or plant a tree in memory of Margery Alice Spiecker, please visit our floral store.

To send flowers to the family in memory of Margery Spiecker, please visit our flower store.