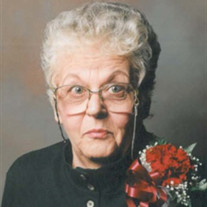 A memorial service will be at 12:00
p.m. on Friday, September 27, 2013 at Park Methodist Church in
Bloomington.  Visitation will be from 10-12:00 p.m. before the
service at the church on Friday.  Cremation rites have been
accorded.  Memorials may be made to the family in Marilyn's
name.  Kibler-Brady-Ruestman Memorial Home in Bloomington is
assisting the family with arrangements.

Marilyn was born on May 27, 1936 in
Bloomington, a daughter of Frank and Bernice (Wells) Ditchen. She
was married to Albert "Abby" Prunty.

The family would like to extend a
special thanks to the staff at McLean County Nursing Home for their
care and support during her stay there.

She loved spending time with her
family and playing bingo, lottery tickets, watching her 'soaps',
and her dog Snickers and 4 cats.

To send flowers to the family or plant a tree in memory of Marilyn J. "Butch" Ditchen Prunty, please visit our floral store.

To send flowers to the family in memory of Marilyn Prunty, please visit our flower store.