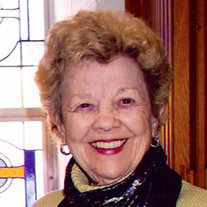 She was born June 5, 1934 in
Clayton Township in Woodford to Edward C. and Alvena (Warnkes)
Tjaden. She married Robert Milashoski on February 14, 1953 in
Minonk. He preceded her in death on March 9, 2002.

She was preceded in death by her
parents, one sister, Lorene Robbins; three nieces, Susan McCurdy,
Sue Ann Janssen and Leanne Tjaden.

Marilyn retired from the General
Electric Company in Streator.

She was a member of the Immanuel
Lutheran Church in Minonk, where she had been active in her
church.

Funeral services will be at 11 a.m.
Tuesday, May 21, 2013 at the Immanuel Lutheran Church in Minonk
with Rev. Ray Barclay officiating. Visitation will be from 4-7 p.m.
Monday, May 20, 2013 at Ruestman-Harris Funeral Home in Minonk and
one hour prior to the services at the church on Tuesday. Burial
will be in St. Patrick's Catholic Church Cemetery in Minonk.

Memorial contributions may be made
to the Immanuel Lutheran Church in Minonk.

Online condolences may be sent to
the family at ruestmanharrisfuneralhome.com.

To send flowers to the family or plant a tree in memory of Marilyn "Mernie" Milashoski, please visit our floral store.

To send flowers to the family in memory of Marilyn Milashoski, please visit our flower store.