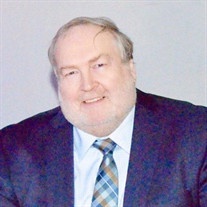 Benson - Mark Leonard Eckhoff, 62, lifetime resident of Benson, Illinois, went to be with the Lord on April 18, 2018 after a long struggle with cardiac issues and his earthly heart could beat no more. His close friends say, "Mark had a very big heart that gave so much it wore out."

Surviving is his sister, Marilyn Kennell of Wichita Falls, TX; his niece Beverly (Rogers) Lavender of San Antonio, Texas and her family, Nathan & Lacey Lavender of Bastrop, Texas, Air Force Staff Sargent Zach & Kelsey Lavender and their son George Wyatt, of North Pole, Alaska; nephew, Timothy & Cassandra Kennell and their family Gabriel, Naomi, and Elijah, of Fargo, North Dakota; and many, many other family and friends.

He was preceded in death by his parents, one sister, Marlene Joyce Eckhoff and one niece, Michelle Kay Kennell.

Mark retired from Caterpillar in 2009 where he worked as an electrician. More recently he was working for Roanoke Motors and helped the farmers during harvest. Mark was an active member of the community, as a member of St. Peter Lutheran Church, he lead youth at church camp. He had been a member of the Benson Ambulance service. His favorite television/movies were Star Trek and the Star Wars series, and his favorite sports team was the St. Louis Cardinals.

The family extends their special thanks to the EMS/First Responders and all the officials in Cooper Towne and Boonville, Missouri for their service and care of Mark until he made his journey back to Benson.

In lieu of flowers, memorial many be made to the Benson Ambulance. Online condolences may be sent to the family at knappjohnsonharris.com

To send flowers to the family or plant a tree in memory of Mark Eckhoff, please visit our floral store.

To send flowers to the family in memory of Mark Eckhoff, please visit our flower store.