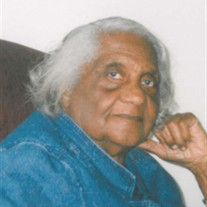 Graveside services will be at 1:00
p.m. on Thursday, October 3, 2013 at Evergreen Memorial Cemetery in
Bloomington with Bishop Edward T. McGhee officiating.
Memorials may be made to OSF Hospice.  Kibler-Brady-Ruestman
Memorial Home in Bloomington is assisting the family with
arrangements.

She was preceded in death by her
parents, husbands, a daughter, Mary Ellen Crawford and two
granddaughters.

Mary was employed at St. Joseph
Hospital in Bloomington for over 60 years, she retired in
1976.  She also worked for Dr. Stevenson and Jefferson Bakery
both in Bloomington.

She was a member of the Christ
Temple Pentecostal Church in Bloomington for 53 years. Mary
enjoyed spending time with family and friends.

To send flowers to the family or plant a tree in memory of Mary Bowden, please visit our floral store.

To send flowers to the family in memory of Mary Bowden, please visit our flower store.