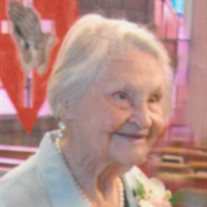 In lieu of flowers, memorials may
be made to Illinois Wesleyan University Drama Department.
Kibler-Brady-Ruestman Memorial Home in Bloomington is assisting the
family with arrangements.

In addition to her husband, Rudd,
Polly was preceded in death by her parents and son in law, Theo
DeVreize.

She was descended from early
settlers of McLean County and raised in Bloomington. She attended
Miss Hall's School in Massachusetts and graduated with a degree in
French literature from Smith College in the Class of 1927. She
received a Doctorate in French literature at Bryn Mawr College and
Brown University. From 1928-1952 Polly taught in the French
Departments at University of Illinois, Brown University, University
of Maryland and the Institute of Contemporary Arts in DC. Her
husband, Rudd was a popular professor in the English Department,
University of Maryland.

She loved the theater and was a
member of Theatre Lobby. She was active in the Tricoleur Theatre
Club and for many years produced an annual Christmas play at the
Metropolitan A.M.E. Church in DC. She was a member of The Women's
Club of Chevy Chase and the Washington Bridge League,and the
History and Art Club of Bloomington. Swimming was an integral part
of her exercise program and she remained vigorous and alert until
she broke her hip at the age of 107.

The family spent many summers in
Bloomington, visiting Polly and Rudd's parents and later their son,
William who practiced medicine in Bloomington.

To send flowers to the family or plant a tree in memory of Mary "Polly" Fleming, please visit our floral store.

To send flowers to the family in memory of Mary Fleming, please visit our flower store.