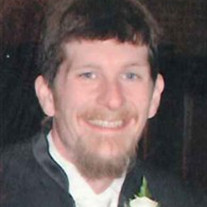 Matt was preceded in death by his grandfather, Ray McCollum,
grandparents, James and Golda Payne, and his uncle Lynn
McCollum.

Matt attended Eureka High School and graduated from the Illinois
Welding School. He was employed by Tri-C Company for 15 years as a
welder.

Matt was a devoted father, husband and son. He loved to fish,
camp, playing the guitar,  and all types of music with the
Blues being one of his favorites. He was a member of the Soggy
Bottom Blues Band. Matt never met a stranger and had the ability to
make everyone around him laugh.

In lieu of flowers, a memorial fund has been established for the
family. Donations may be made to the Matt McCollum Memorial Fund at
Goodfield State Bank. Online condolences may be sent to the family
at www.ruestmanharrisfuneralhome.com.

To send flowers to the family or plant a tree in memory of Matthew R. McCollum, please visit our floral store.

To send flowers to the family in memory of Matthew McCollum, please visit our flower store.