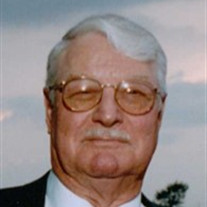 
Mel was a Korean War veteran. He served as a Ranger
in the 82nd Airborne Division stationed in the United
States and in Germany, where he met his wife, Rocky, who was
stationed in Zweibrucken, Germany as a member of the 3rd
fighter wing of the Royal Canadian Air Force. He retired from Local
150 Operating Engineers in October, 1996. He was also a member of
the First Presbyterian Church of Henry, where he served as an elder
and a member of the session, Ladd Moose Lodge #1528 and John Steel
Chapter 82nd Airborne Division Association.


Mel's two greatest passions in life were his family
and his faith. He also liked gardening, traveling, and camping. He
especially enjoyed visiting Banff National Park in Calgary, Alberta
Canada. He was a loving and devoted husband, father and Papa. We
will forever miss him. He will always be in our hearts and
memories.

Cremation rites have been accorded with a memorial service on
Thursday, February 20, 2014 at 12:00 p.m. with visitation one hour
prior at Lenz Memorial Home in Lacon, IL.  Reverend Tim Barber
will officiate. Inurnment will be at a later date.  Memorials
can be given to Peoria Rescue Ministries or the Paralyzed Veteran's
Association. Online condolences can be left at
lenzmemorialhome.com

To send flowers to the family or plant a tree in memory of Melvin "Mel" Porch, please visit our floral store.

To send flowers to the family in memory of Melvin Porch, please visit our flower store.