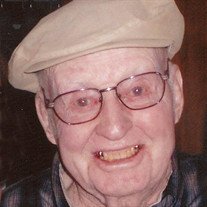 Merlyn farmed in the Roanoke/Benson area most of his life where he raised soy beans, corn and Charolais cattle.

He served his country in the United States Army during WWII in the 8th Calvary.
He was a member of the Eureka Church of Christ. Merlyn was a 4H leader for many years.
He was an avid pool player and loved playing games with his children and grandchildren. Anyone who knew Merlyn knew he was a quiet man outwardly but an extraordinarily generous and loving man inwardly. His smile combined with the twinkle in his eyes melted his grandchildren's hearts. He will be greatly missed by all who knew and loved him.

Memorial contributions may be made to the Hands of Compassion, 840 West Center St. Rochester, MN 55902. Online condolences may be sent to the family at knappjohnsonharris.com


To send flowers to the family or plant a tree in memory of Merlyn E Augsburger, please visit our floral store.

To send flowers to the family in memory of Merlyn Augsburger, please visit our flower store.