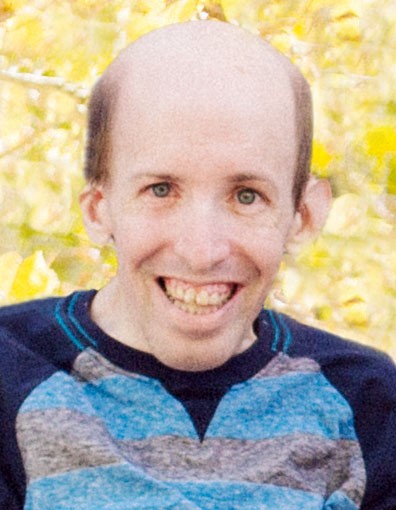 He was preceded in death by his maternal grandparents, William and Betty Hodel; paternal grandfather, Richard Stoller; and two cousins, Brian Hodel and Jacob Hodel.

Michael lived all his growing up years in Roanoke. He graduated from Metamora High School in 2003. He worked at the Eureka Apostolic Christian Nursing Home for a number of years before his physical limitations became too burdensome. In 2011, he moved with his family to Colorado.

Michael loved people, young and old, but he especially loved babies. He never knew a stranger and had a smile and a hug ready for everyone. And though he is often thought of as quiet and gentle, he also had a love for all things wild and free. He loved NASCAR and even had the opportunity to speed around the track in a stock car on his 30th birthday.

Michael loved Jesus and declared his commitment through baptism in 2017. From that time on, his faith became more alive than ever and he was frequently observed raising his hands in worship and nodding his head or thumping his chest in a silent, “Amen!”

Throughout his life, Michael’s physical condition often limited his ability to participate and communicate in various situations. But the unconditionality of his love, the daily endurance without complaint, and the boundlessness of his joy, were a remarkable testament to the person within.

We will miss you so much, sweet Michael, but we are filled with joy knowing where you are and the great reward you have received.

Funeral services will be held at 10 a.m. on Wednesday, March 2nd at Roanoke Apostolic Christian Church. Church ministers will officiate.  Funeral services will be livestreamed and can be accessed by clicking the link at the roanokeacchurch.org web page. Visitation will be held from 4-7 pm on Tuesday, March 1st at Knapp-Johnson-Harris funeral home in Roanoke and from 9-9:45 am on Wednesday prior to the services at the church.  Burial will be in the church cemetery.

In honor of Michael, memorial contributions can be made to the family to help in assisting with expenses or can be given to the Apostolic Christian Home of Roanoke.  Online condolences and tributes may be sent to the family at knappjohnsonharris.com

To send flowers to the family or plant a tree in memory of Michael Edward Stoller, please visit our floral store.

A Memorial Tree was planted for Michael

To send flowers to the family in memory of Michael Stoller, please visit our flower store.