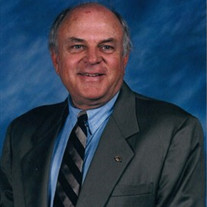 Mike
Williams
Bloomington- Mike Williams, 73, of Bloomington
passed away on Saturday, October 6, 2012 at 12:06 am in Normal at
Advocate BroMenn Regional Medical Center. Per Mike's wishes
cremation rites will be accorded. Private family services will be
held at St. John's Lutheran Church in Bloomington with the Rev.
James E. Reents officiating. Inurnment will take place at St.
John's Lutheran Church Columbarium. Kibler-Brady-Ruestman Memorial
Home is assisting the family with arrangements.

In lieu of flowers, memorials are
respectfully requested to be made to The Michael J. Fox Foundation
for Parkinson's Research, Grand Central Station, PO Box 4777, New
York, NY 10163-4777, St. John's Lutheran Church, or an organization
of the donor's choice in Mike's name.

Mike was born on June 11, 1939 in
Indianapolis, IN, a son to Warren W. and Anne (Komstohk) Williams.
He graduated from Broad Ripple High School in Indianapolis in 1957.
Mike attended Indiana University and earned his Bachelor's of
Science in Business in 1961. He married Julie Mills on July 7, 1962
in Moline, IL, she survives.

He worked as a manufacturer's
representative for California Pellet Mill Company and later was the
owner of Agri-Process Pelleting Inc. of Bloomington a business
which he founded.

In addition to his wife Julie, Mike
is survived by two daughters, Stacey(J.D.) Olsen of Bloomington,
and Diana (Ted) Brown of Birmingham, MI. Also surviving are his six
grandchildren, Cory, Kyle, Julianna, Garrett, Collin, and
Graham.

Mike enjoyed guitar music, taking
care of his lawn, and was a big racing fan. He was proud to be a
season ticket holder for the Chicago Bulls, and loved to give his
tickets to his friends and family so they could be a part of it
too. Mike was dearly loved and will be sadly missed by his family
and friends.

To send flowers to the family or plant a tree in memory of Mike Williams, please visit our floral store.

To send flowers to the family in memory of Mike Williams, please visit our flower store.